Love of Adventure: The Crossover Between Steampunk Tales & Epic Stories

I am currently blog touring to celebrate the release of “The Gathering of the Lost”, the second novel in my epic The Wall of Night quartet. 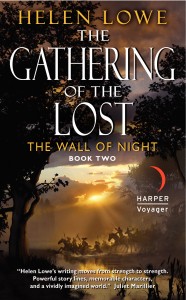 I was delighted when Pip and Tee asked me to stop by here at The Shared Desk:  not least because when I read the rambunctious, rollicking opening to their Phoenix Rising, the first in the Ministry of Peculiar Occurrences series, I thought, ah—now here are a pair of storytellers who share my own love of an adventurous tale!

This of course got me thinking, because although the Wall series is epic fantasy, steampunk is a genre I have loved since first reading Tim Powers’ The Anubis Gates—and I have been a keen follower of Phil and Kaja Foglio’s Girl Genius Online for quite some time now… “Adventure, romance, mad science”—what could be better? Unless, of course, it is “adventure, romance, and ‘strange magic’”

Adventure is definitely one of the key ingredients I enjoy in my storytelling. Yes, I like the deeper questions around who we are and why we are here, and what makes for the good and true between protagonists or within a society. But if that comes in a wrapping of rooftop chases and duels, border skirmishes and glorious charges, bands of brothers—and/or sisters—standing shoulder to shoulder against the odds, then I know I shall more than likely enjoy the read. And the two most adventurous classes of fantasy, in my humble opinion, are steampunk and epic fantasy.

Another similarity between the two is that both tend to draw heavily on particular historical periods. With epic it is usually the medieval period, although David Gemmell’s Lion of Macedon and Dark Prince duology uses alternate classical history. Steampunk’s era is the mechanical age of the nineteenth and early twentieth centuries, although tales such as Scott Westerfeld’s Leviathan series also bring in “Darwinist” ideas of genetic engineering.

The ethos of each genre is not only the culture of weapons and clothes, technologies and social mores, but also the sense of adventure inherent in the age. This can mean the tournaments and heavily armored knights that feature in “The Gathering of the Lost”, or the Victorian notion of the “gentleman adventurer” that pervades both Phoenix Rising and The Anubis Gates. Full-blown war characterized both historical eras and can be seen not only in The Lord of the Rings, but also in tales such as Girl Genius and Leviathan. In “The Gathering of the Lost” too, one feels that war is coming…

I have also been debating whether there is a substantive difference between the two styles of fantasy, beyond the trappings of culture and historical era. On balance, I think there may be—but it is not a toss up between “mad science” and magic. Instead I feel that conflict in epic fantasy is more often centered around a “twilight of the gods”, the notion that everything will fail if the great war is lost. (And there is almost always a “great war.”) I pick up on this theme in The Wall of Night series with the epithet, “If Night falls, all fall.”

In steampunk, I find that the conflict is usually less “final”—a society or regime may be at stake, but not life and the universe as we know it. Within these respective frameworks though, the style of storytelling remains very similar. These are tales of quests and chases and mysteries to be resolved, with plenty of swashbuckling fun and edge of the precipice adventure to keep the reader entertained.

And on that note, here is a little rooftop adventure from “The Gathering of the Lost”:

“… Kalan was moving as he spoke and Malian sprang to catch up, feeling a rush of exhilaration, so darkly fierce it was almost joy, as they cleared the first narrow street, cobbles flashing beneath them. To fall would be to die—but they were not going to fall. Her blood sang as they ran on, keeping to the narrow lanes and close-packed houses of the poorer quarters where there were plenty of sharp angles and deep shadows to hide in.
Soon they were running as one, each knowing intuitively how the other would move, racing up roof slopes without hesitation and plunging down the far side, floating effortlessly across the gaps between buildings until Malian felt as though she were flying above Caer Argent. The pale gold moon kept pace alongside, so close it seemed she might touch it, or gather the white stars for a crown … if only she stretched out her hand at the right moment.
They dropped down to street level again several times, but the old parts of the city were a maze, the streets little more than alleys with many dead ends. The roofs offered a clearer path, and they could orient themselves by the towers of the palace complex, and the basilica’s dark crown. Malian was unsure when the mindsweeps stopped, but it was a long time after that when she noticed the stars growing pale, a reminder that the midsummer dawn came early. She knew they must have crossed half the city and by rights she should feel tired, but instead she felt wonderfully and gloriously alive.”

Helen Lowe is a novelist, poet, and interviewer. She has won the Sir Julius Vogel Award for achievement in SFF for both Thornspell (Knopf) in 2009, and The Heir of Night (The Wall of Night Book One) in 2011. The Heir of Night has also just been shortlisted for the Gemmell Morningstar Award and Helen is currently the Ursula Bethell writer-in-residence at the University of Canterbury. She posts every day on her Helen Lowe on Anything, Really blog, on the 1st of every month on the Supernatural Underground, and occasionally on SF Signal. You can also follow her on Twitter: @helenl0we.

10 Responses to Love of Adventure: The Crossover Between Steampunk Tales & Epic Stories